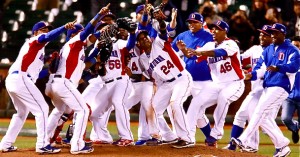 The 2013 World Baseball Classic championship game will be an all-Latino affair thanks to the Dominican Republic’s 4-1 win over the Netherlands at AT&T Park in San Francisco Monday night.

Also of note, the Dominicans’ win Monday avenges their ouster by the Netherlands—which features many players from Curaçao, one of its constituent countries—from the 2009 World Baseball Classic.

The Game: The Dominican Republic erased a 1-0 deficit with a four-run rally in the fifth inning. Moises Sierra, who made an incredible catch in foul territory in the first inning, got it started with an RBI double to left; Jose Reyes knocked in Sierra with a bloop single to center and scored on a wild pitch during Robinson Cano’s at-bat; and Edwin Encarnacion punctuated the outburst by singling in Miguel Tejada.

All four runs were charged to the losing pitcher, lefty Diegomar Markwell, who gave up six hits, one walk and was removed with two outs in the fifth.

After right-handed starter Edinson Volquez yielded a run in the first, he shut the Netherlands down over the next four frames. Volquez, the winning pitcher, went five innings, allowed one run on two hits and two walks, and struck out five batters.

Kelvin Herrera (2.0 IP), Pedro Strop (1.0 IP) and Fernando Rodney (1.0 IP) combined to throw four scoreless innings following Volquez’s exit. Rodney faced the minimum in the ninth for the save. He got ex-Yankee Andruw Jones to pop out to second and struck out the game’s last two hitters, Curt Smith and Jonathan Schoop, swinging and looking, respectively.