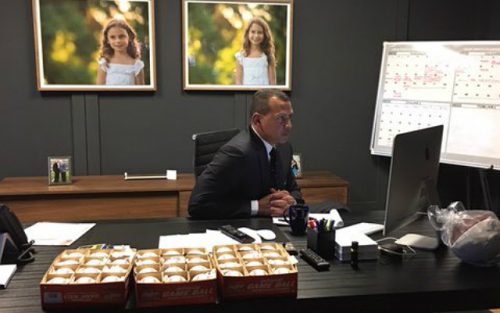 Alex Rodriguez has always been interested in the business world. Now that he’s retired from baseball, the former superstar is going full steam ahead as a budding entrepreneur.

“I’m very data driven and I like numbers. I always said that in business, numbers don’t lie,” Rodriguez told NBC.  “I started seeing a lot of athletes going bankrupt at a 70 percent rate within a few years of retirement. So I wanted to start my own investing.”

Rodriguez, who won a World Series championship as a New York Yankee, has continued his success off the field with his own businesses, AROD Corp. he started investing in a small duplex over some 15 years ago, and now that is no longer active in baseball, he is going all in with his company, which manages more than 15,000 apartment units in 12 states. They use both their own capital and outside money as well.

AROD Corp. has investments primarily in real estate but also in sports & wellness and media.

“In business, we’ve been really fortunate. The market the last five years have been incredible,” Rodriguez said. “We’ve been laser-focused in every sector we participate in. And now we’re in real estate, auto dealership, and in fitness.”

AROD is also active with various TV contracts as a host and special guest appearances, that coupled with all else he is doing, including spending time with his significant other Jennifer Lopez keeps him busy, we are sure.

Rodriguez indicated he has some big name investors such as Warren Buffett and others as some of his mentors, he also acknowledged he needs to put in the work to succeed. The two became acquainted after Buffett insured a part of Rodriguez’s 10-year, $252 million contract with the Texas Rangers. The then 25-year-old baseball star emailed Buffett’s assistant to ask if the two could meet. Buffett said he believed Rodriguez would be successful in his business ventures.

“Alex gives me some credit, but he doesn’t need me,” Buffett said. “He’s got a money mind. He just gets things, if they’re business- or money-related.”

“Most athletes get gamed,” Buffett told Sports Illustrated. “They’re pigeons, basically. They don’t have a nose for smelling out the people that are promoters rather than true friends. I don’t know if the term is used anymore, but we used to call them jock-sniffers. They promote partnerships, the young kid is getting checks like he never dreamt of before. Sometimes even their agents may be in cahoots. That has not happened to Alex, and it wouldn’t happen to Alex. He’s got a bull shit detector that’s pretty damn good.”

“You know, business is like a sport. You have to put in your 10,000 hours and it takes time,” Rodriguez said. “And for me, my philosophy is slow and steady will win the race and there’s no reason to be in a rush.”

23 Hispanic Americans that Were the First to Excel in Their Fields
The U.S. Army’s Little Known all Mexican-American Infantry Unit of WWII
Translate »
%d bloggers like this: