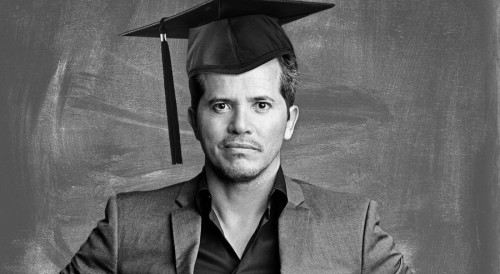 It’s another one man show and this time John Lequizamo is doing a different kind of teaching. Instead of his past efforts which often played up Latino stereotypes, he is now pointing out gaps of essential men and women in the often watered down version of Latino History. And he is going to make you like it.

To make it palatable for American audiences he had to balance comedy and real life facts in a new one-man show called “Latin History for Morons, anyone? He has focused on performing it in comedy clubs rather than theaters.

“The show is a departure for me.”

The origin of this effort sprung from a talk he had with his son about whether we had Latino heros that made a difference outside of performing on a stage or on the screen.

“I knew we had to have done something more impactful,”

“I started doing research and the floodgates opened.”

The facts speak for themselves. Latinos fighting in every American War. Latinos serving as Generals. There are many historical truths and Leguizamo is laying it out for those who need to be educated. But it takes a certain approach to get it through.

“It’s always easier to smuggle in information with humor than straight,”

“I hope it’s a wakeup call. There is so much material of great Americans that are Latino that need to be done.”

Just as there are many moments that Latinos have buried in the dust-bins of history, here below we present five little known facts about the career of John Leguizamo. Research is Rich. No matter where you start.

–John’s television debut was a small role in Miami Vice.

–Leguizamo was an extra in Madonna’s 1983 “Borderline” music video.

– In 1995, Leguizamo was the creator, producer, and writer of a Latino variety show “House of Buggin” on Fox which mirrored “In Living Color.”

John makes his Broadway debut with the one-man show “Freak in 1998.”