TMC plans to bring the total number of public hotspots in NYC to 10,000 by yearend – all available at no additional cost to customers with Standard Internet and above or on a pay as you go basis to non-subscribers. Customers also can access more than 75,000 TWC WiFi Hotspots across the tri-state area of New York, New Jersey and Connecticut at no cost.

To view all the available hotspot locations go to: www.twc.com/wificoverage. 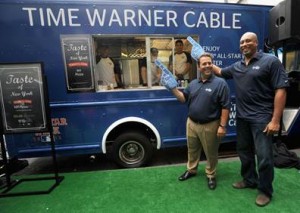 TWC also revealed our Food Truck program that will take place during All-Star Week. There will be six branded food trucks – all equipped with free TWC WiFi – serving up baseball giveaways and regionally themed food – at locations throughout the City, along with MLB player appearances. Proceeds raised at the food trucks will benefit the Robin Hood Relief Fund to support those impacted by Hurricane Sandy. A schedule of food truck stops and player appearances is available at TWC.com/MLBAllStarWeek.