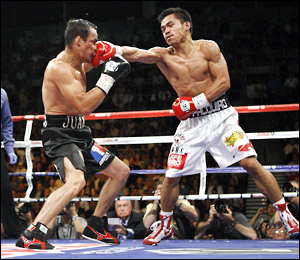 It’s a special edition of HBO BOXING AFTER DARK® when HBO Sports presents MANNY PACQUIAO VS. JUAN MANUEL MARQUEZ III, the exclusive replay of their welterweight title showdown, this SATURDAY, NOV. 19 at 10:30 p.m. (ET/ PT) on HBO.  The HBO Sports team, which was ringside for the live event at the MGM Grand Garden Arena in Las Vegas, calls all the action.  The replay will be available in HDTV.

Worldwide icon Pacquiao and battle-tested ring veteran Marquez met Saturday, Nov. 12 for the third chapter of their stirring rivalry, which was carried live on HBO Pay-Per-View®.  Pacquiao captured a majority decision in the hotly contested battle.

The evening of boxing programming starts at 10:00 p.m. with the first episode of “24/7 Cotto/Margarito,” an all-access series focuses on the two rivals preparing for their Dec. 3 rematch at New York’s Madison Square Garden, to be presented live by HBO Pay-Per-View®.