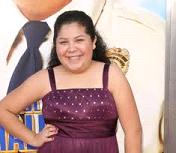 Paul Blart’s daughter is going from the mall to the recording studio in the new Disney channel sitcom, Austin and Ally. The actress, who’s younger brother just so happens to be Rico Rodriguez of Modern  Family, will play Trish, the protagonist’s best friend.
The sitcom is a musical comedy about a duo comprised of a confident singer, played by Ross Lynch, and a shy songwriter, played by Laura Marano, who team up to make music.  There are, however, the typical problems characteristic of preteen Disney shows make their collaboration in music hectic. According to Disney Channel, Rodriguez’s character in the show is “always looking for the perfect job”.
Rodriguez is not new to Disney. She recently starred in Walt Disney Pictures film “Prom”, which arrived on Blu-ray and dvd in late August. If she is anything like her famous Disney predecessors, she will soon be joining the ranks of her brother and become a common household name.
Austin and Ally is set to premier on December 4.