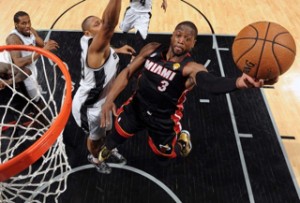 LeBron James, Dwyane Wade and Chris Bosh scored a combined 85 points in Game 4 of the 2013 NBA Finals Thursday at the AT&T Center, leading the Miami Heat past the San Antonio Spurs 109-93.

James had a game-high 33 points, Wade scored 32 points, and Bosh—who blocked two shots and came down with 13 rebounds—added 20 points.

The best-of-seven is now even at two games apiece, turning the series into a best-of-three.

The Spurs, whose leading scorer Thursday was Tim Duncan (20 points), were done in by a poor fourth quarter, getting outscored 28-17. They entered the quarter trailing Miami 81-76.