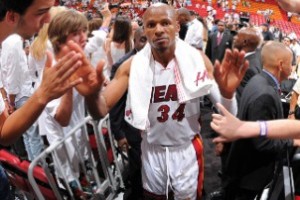 Eighteen-year veteran Ray Allen’s 3-pointer with just over five seconds left in Game 6 of the NBA Finals bailed the Miami Heat out Tuesday.

This year’s NBA Finals is going the distance.

Down 75-65 after three quarters, the Miami Heat came back to stun the San Antonio Spurs at AmericanAirlines Arena Tuesday, edging out a 103-100 win in Game 6. The defending champions got a game-tying 3-pointer from Ray Allen with 5.2 seconds left in the fourth quarter, then outscored San Antonio 8-5 in overtime.

Mere seconds from dethroning Miami, the Spurs, protecting a three-point lead, were undone in Game 6 by Bosh’s offensive rebound after James missed a shot from behind the arc. Bosh quickly passed the ball to Allen, who had already planted himself on the far corner, and the 10-time NBA All-Star shooting guard knocked down the clutch 3-pointer to even the contest at 95.

Spurs power forward Tim Duncan scored a team-high 30 points in Game 6—but only five of his points came in the second half. Kawhi Leonard and Tony Parker had 22 and 19 points, respectively.

Game 7 on Thursday, also in Miami, is scheduled to start at 9 p.m. ET.

Will Smith Shoots Video of His 6 weeks in Cartagena Colombia