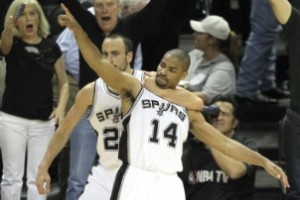 San Antonio Spurs shooters were too hot for the Miami Heat in Game 3 of the 2013 NBA Finals at the AT&T Center Tuesday night, combining for a Finals record 16 3-pointers in a 113-77 rout.

The Spurs’ 36-point win gives them a 2-1 series lead in the best-of-seven, which resumes Thursday in San Antonio.

Garry Neal (24 points) and Danny Green (27 points) co-starred in the relentless, 3-point range bombardment of Miami in Game 3, shooting 6 of 10 and 7 of 9 from behind the arc, respectively.

Outside of the Heat’s Mike Miller scoring 15 points on 5 of 5 shooting (all 3-pointers), there weren’t any offensive bright spots for the defending champions Tuesday. LeBron James had 15 points despite attempting 21 shots, and Dwyane Wade and Chris Bosh scored 16 and 12 points, respectively.