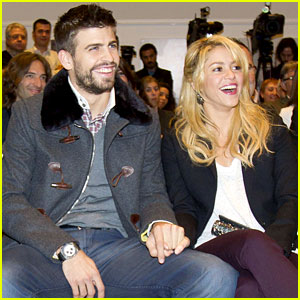 Looks like Gerard Pique pulled a fast one on his 4.7 million followers, fans and the press via Twitter Thursday night announcing the birth of his baby boy with Shakira. Some newspapers even published it on their website headlines and others were getting ready to print hard copy. Pique tweeted “Ya ha nacido nuestro hijo! Estamos muy felices! Gracias a todos por vuestros mensajes!”! (“Our first son was born! We are really happy! Thanks to everyone for their messages!”) The short message was re-tweeted more than 23,000 times! 10 hours after the birth announcement the soccer star tweeted “Ya tiene nombre! Se llama Inocencio! Feliz Día de los Inocentes a todos! (It has a name! It’s called Innocent! Happy Fool’s Day!”) Pique’s joke was done on Spain’s equivalent of April Fool’s Day. A representative for the 35-year-old Latin pop singer and the much younger 25-year-old denied the baby was born. “Shakira is sleeping. She’s calm,” her spokesman, Rodrigo Beltrán, told the media. “The baby is expected to be born in the beginning or the middle of February.” Nice job Pique! LOL Imagine when Shaki really gives birth!!!