Amanda Serrano will fight for a world title in a sixth weight division on Saturday, September 8 at Barclays Center, the home of BROOKLYN BOXING. Brooklyn’s Serrano will face Yamila Esther Reynoso for the vacant WBO Junior Welterweight World Championship. If successful, Serrano will set a women’s boxing record as a six-division world champion, joining Manny Pacquiao and Oscar De La Hoya as the only boxers, male or female, to reach the mark. 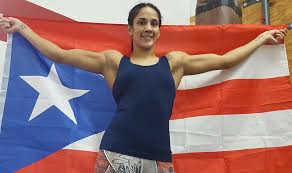 Serrano (34-1-1, 26 KOs), who is already the only woman to win titles in five weight classes, is looking to best her personal record. Born in Carolina, Puerto Rico and representing her hometown of Brooklyn, Serrano has won titles from 118 to 135 pounds, earning her the No. 2 ranking on the BWAA’s inaugural women’s pound-for-pound list. The 29-year-old is also the only Puerto Rican, male or female to capture world titles in five different weight classes and will look to build on that record against Reynoso. She fights for the fifth time in her career at Barclays Center on September 8 with a chance to once again make history again in front of the passionate fan base of Puerto Rican boxing fans in New York.