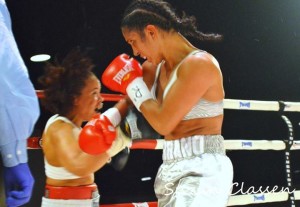 Amanda “The Real Deal” Serrano handed Dominga Olivo a real deal beatdown in the main event of an eight-fight card at the Resorts World Casino in Queens this past Saturday, pummeling her opponent until scoring a third-round TKO.

The fight was stopped with 1:18 remaining in the round.

According to Thaboxingvoice.com, the 24-year-old Serrano reduced Olivo, 41, to a “punching bag,” landing her “full arsenal” of punches at an alarming rate.

Serrano, who shared the cover of LatinTRENDS magazine’s June 2013 issue with her sister and fellow 130-pound fighter, Cindy, improved to 17-1-1 with what marked her 13th career knockout victory.

Olivo, who hadn’t fought in more than two years prior her super featherweight bout with Serrano, fell to 8-8-1.