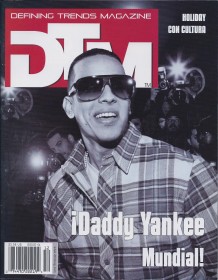 Daddy Yankee’s “Grito Mundial,” the lead single from his upcoming album, “Daddy Yankee Mundial,” was heard loud and clear by more than 500 in attendance during a private, Dec. 1st listening party at Manhattan’s club Quo.

DTM Magazine was at the event, which marked the beginning of a campaign to promote the album in the States. The doors opened at 6 p.m., at which time stylishly-dressed fans partied to Daddy Yankee classics of old, as well as more recent hits such as “Machucando” and “Impacto,” for more than two hours, before El Cangri himself arrived – flanked by club and private security – and made his way into Quo’s VIP section for a face-to-face with the press. The event was sponsored by Coors Light beer.

A year after a successful foray into the film medium with “Talento de Barrio,” Daddy Yankee, real name Ramon Ayala, is poised to make a return to the silver screen next summer, but for now he’s focused on bringing the sounds of his ninth studio album to a worldwide audience.

“The musical mixture that I have in ‘Mundial’ comes from the opportunity that I’ve had to travel around the world and incorporate those sounds that I’ve learned in one album, but without losing that urban edge that I represent,” Daddy Yankee told writers after wrapping up his TV interviews.

“We have a fusion of many themes in the single, ‘Grito Mundial’; Jamaican music, Plena; the European, Puerto Rican, Dominican and Colombian influences are present, as well as instrumentals from Venezuela.” “I’m a little anxious about the release, you know, ‘cause it’s natural,” he added. “If you don’t feel that way, you’re not really a human being. Besides that, I’m pretty comfortable with the position that I have right now, because I have developed new musical material. Besides writing the lyrics, I’m also working on the production side, so I feel great about what we have in this album.”

Perhaps not coincidental on the Puerto Rican Reggaetonero’s part, was producing a single titled “Grito Mundial” several months before the world over becomes fixated on the 2010 FIFA World Cup. Despite lobbying heavily for it to become the theme song of the prestigious month-long soccer tournament, the track wasn’t selected.

But there are no hard feelings, said Daddy Yankee, since the driving force behind its creation was more so about appealing to fans around the globe by promoting the freedom of expression than anything else. “I wanted to do a song that captured the spirit of the World Cup, so as to make it possible to celebrate the event and that excitement every day, not just every four years,” the 31-year-old said of the anthem. “I did it from the heart, asking people – through the song – what their worldwide shout was. It’s about getting people to express themselves without being shy or scared about it.”

Targeting an early February 2010 release, Daddy Yankee recently completed negotiations with Sony Music for a deal to distribute the album. Along with the lead single, the album has a total of 12 tracks, including “Soldado” (feat. Barrington Levy) and “Una Oportunidad” (feat. Luis Fonsi). That said, as decorated as those two of Daddy Yankee’s collaborators are, the anticipation of a song with former nemesis Don Omar may dwarf the hype of the album itself.

The two Reggaeton heavyweights were anything but friends as recently as early 2008, when they were in the midst of a heated and well-publicized rivalry. But through some form of back-channel diplomacy, they’ve buried the hatchet, and since have appeared together in live performances.

There was much to be learned of the tragic ending of the Notorious BIG vs. Tupac Shakur rap battle-turned-street-war of the mid-1990s. In 2001, Jay-Z and Nas got deeply personal, spewing lyrical vitriol at each other, but fortunately their battle never spilled outside of their respective studios. Years later, the two would have a profound reconciliation, which turned out to have a sobering effect on Hip Hop.

The peace between Daddy Yankee and Don Omar, much like in the case of Jay-Z and Nas, proves that men, or women of great stature should seize the opportunity (before it’s too late) to set a positive example for their followers, instead of descending into needless violence. “That made a big impact with the people,” Daddy Yankee told DTM. “We squashed that beef [almost] two years ago, and now it’s time to represent that new union. The people are waiting for our song, ‘Desafio,’ and you will see that in Daddy Yankee Mundial.”

Finally, while Daddy Yankee and a handful of his contemporaries in Reggaeton have been immune to the overall decrease of its popularity, he offered an explanation that cautions skeptics, by reminding them to make a distinction between the genre’s commercial performance and what the music means to its most loyal followers.

“The music right now, we’re in a great position,” the San Juan, P.R. native proclaimed. “Sometimes people don’t understand that Reggaeton is a genre that really doesn’t depend on radio or television, you feel me? We artists are a part of the people; we make music for the people.” “And the people respond to that because this isn’t just a genre, it’s a lifestyle. We’re bigger than just music.”