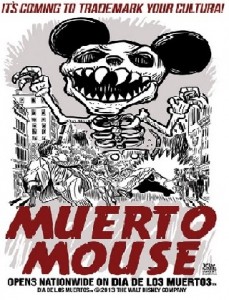 “Disney Wants To Trademark ‘Dia De Los Muertos’ oh yeah? TRY US! we ARE the fastest growing demographic – JUST TRY US,” tweeted Valentina Harper, or by her twitter handle: @roastedsmurf, is just one of the few responses made by many against Mickey Mouse’s beloved home, Disney.

Yesterday, Disney received some harsh words via twitter when it was reported that the company had filed a trademark application for the phrase “Dia de los Muertos.” However, after the massive outcry Disney has decided to drop its application today.

The internet exploded with outrage against the beloved, and clearly sometimes controversial, kids’ entertainment powerhouse fearing the company was branching out to acquire domain over cultures a part from anything else the company can reach.

El Dia de los Muertos (The Day of the Dead), is a traditional holiday celebrated by Mexicans and parts of Central America to commemorate the memories of the deceased loved ones. The negative response is understandable why many would take offense to Disney wanting to claim domainship over a cherished holiday and culture icon to many Latinos.

“Dia de Muertos is a Mexican tradition, it is part of our culture!!! It’s NOT a product. It CANNOT be a trademark!” tweeted @aida_lu who was clearly, and rightfully outraged, by the attempted trademarking.

The snafu began when Disney wanted to trademark the “Dia de los Muertos” or “Day of the Dead” for its upcoming animated film by Pixar studios. Although the trademark was simply for the subject of a film and its possible merchandising, the action made by Disney cause the public to response fearing it was a hostile takeover of a beloved holiday.

Chicano cartoonist Lalo Alcaraz wasted no time drawing his opinion on the matter. With a headline that reads, “Its coming to trademark your cultura,” a shocking depiction of a Godzilla-sized and skeletonized Mickey Mouse rampaging through a city with “Muerto Mouse” under the monstrous beast casts away the cartoon mouse’s original friendly image.

Although Disney did not address the backlash it had attracted, a statement was released stating: “As we have previously announced, Disney-Pixar is developing an animated feature inspired by the Mexican holiday Día de los Muertos. Disney’s trademark filing was intended to protect any potential title for our film and related activities. It has since been determined that the title of the film will change and therefore we are withdrawing our trademark filing.”

This is not Disney’s first foray to causing a uproar with its attempt to trademark. Back in 2011, Disney tried to trademark the term “SEAL Team 6” just after the raid on Osama Bin Laden which resulted in the terrorist mastermind’s death. And like the current debacle, Disney withdrew its application then.

No word yet on whether Disney’s inspired Dia de los Muertos film is still in-production or also scrapped.

The First Family becoming Bilingual
To Be or Not to Be: The Future of San Juan’s Luis Muñoz International Airport
Translate »
%d bloggers like this: