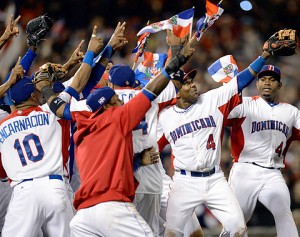 The Dominicans, 8-0 overall in the tournament, went 3-0 vs. their Puerto Rican counterparts, limiting their Caribbean neighbors to two runs over three games.

Story of the game: The Dominican Republic went 2-for-8 with runners in scoring position, while Puerto Rico went 0-for-11.

Shortstop Mike Aviles reached base in the ninth on third baseman Miguel Tejada’s fielding error, but Rodney would ensure a bad ending to Puerto Rico’s Cinderella story in this year’s Classic. Rodney induced a pop-out to second from Alex Rios and struck Carlos Rivera and Luis Figueroa out to seal the victory for the Dominican Republic.

After the game, second baseman Robinson Cano was named MVP of the 2013 World Baseball Classic. Cano had a WBC-record 15 hits in 32 at-bats (.469), two home runs and six runs batted in.