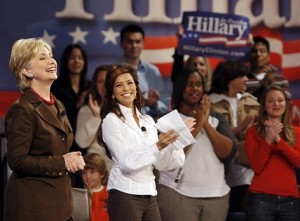 Talks of the 2016 Presidential election have already started! With Hillary Clinton possibly in the running one celebrity has already confirmed her support. Eva Longoria was asked by TMZ cameras if she would campaign for Hillary, to which Eva replied, “Absolutely!”

Longoria is one of the more outspoken celebrity Democrats who even gave a speech at the 2012 Democratic National Convention.

Clinton already has a list of celebrities who have voiced their support for her including Barbra Streisand, Chris Rock and Lionel Richie.

Hillary hasn’t officially announced her plans to run in the 2016 campaign yet.