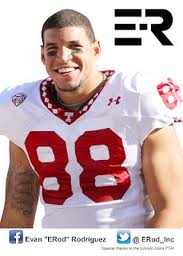 The most prominent Latino, Evan Junior Rodriguez has been drafted to the Chicago bears in the 4th round of the N.F.L. draft. He is a 6’3 tight end and played for the Temple Owls during his college years. The Puerto Rican rookie is excited and is at static he says ” The past few days are like a dream come true. When i got that call from Lovie Smith ( Chicago Bears head coach) and he said they had picked me,wow, i just felt this was a great team with a long history of tough football players. Chicago is a business on the field. I think I’ll fit into the city and team really well. I started thinking of those names like Walter Payton, Gale Sayers, Dick Butkus, Devin Hester and Brian Urchlacher, and it’s crazy. I am so excited to get to chicago and see soldier field and meet the guys. I heard great things about the city in general, the latino community is hopping, I know I’m going to love it. After my name was called at the draft i celebrated pretty quietly with family because i wanted it to be low key, I was nervous to just get it behind me. I would say there was a little sadness that my grandmother wasn’t there to celebrate, but I know she was watching from above and that made me smile. Then my friends from North Bergen started coming in waves, champagne for everyone, it was memorable!” The rookie is looking forward to playing in the N.F.L. and to representing the latin community in the league.