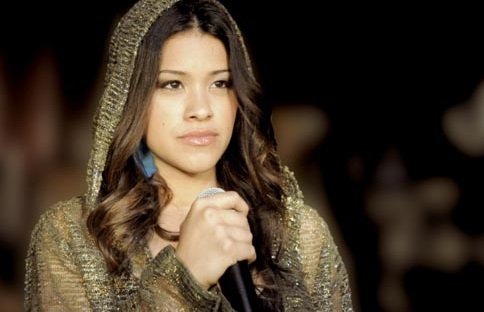 On April 19th, Pantelion proudly presented FILLY BROWN, a captivating and inspirational urban drama that tells the story of “Majo” (a.k.a. Filly Brown), interpreted by breakout star Gina Rodriguez (named Hollywood’s newest “it” girl by the LA Times), as she navigates through the Urban Latino music world as an aspiring rapper, all in hopes of reuniting her troubled family, which includes an incarcerated mother played by the late Jenni Rivera.

FILLY BROWN is the inspiring portrait of a young woman striving to find her voice – without compromising herself or the fate of her family. Majo Tonorio, aka, “Filly Brown,” played by GINA RODRIGUEZ, is a young aspiring hip-hop artist from Los Angeles. With her mother, JENNI RIVERA, in prison and her father, LOU DIAMOND PHILIPS, struggling to provide for his daughters, Filly knows that a record contract just may be the answer to her family’s financial problems. So when a record producer offers her a shot at stardom, she has to choose between selling out her dreams – or saving her family. Directed by Youssef Delara and Michael Olmos, FILLY BROWN is propelled by an exceptional cast featuring Lou Diamond Phillips, Edward James Olmos and the legendary Jenni Rivera in her final on-screen performance. Fueled by a fierce hip-hop score, FILLY BROWN heralds the arrival of Gina Rodriguez in the electrifying title role.

To view the “This Is My Life” video visit:

FILLY BROWN – THIS IS MY LIFE from Youssef Delara on Vimeo.