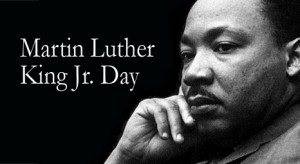 Fueled by his Christian beliefs, Doctor Martin Luther King, Jr transformed from being an American Pastor, to activist, to humanitarian, and became the leader of the African-American Civil Rights Movement. With the fundamental idea of civil disobedience, MLK changed the social standing of this country back in the 60s and enabled the beginning growth of civil rights.

Because of his achievements then, and still moving forward now, today we honor MLK and come together to continue his message of unity against the forces of discrimination.

While he was taken from the world too soon, MLK will forever be an influential figure throughout time. And in his lifetime he managed to aid other civil rights leaders by sharing inspiring words to encourage the fight for others.

“As brothers in the fight for equality, I extend the hand of fellowship and good will and wish continuing success to you and your members…You and your valiant fellow workers have demonstrated your commitment to righting grievous wrongs forced upon exploited people. We are together with you in spirit and in determination that our dreams for a better tomorrow will be realized.”

The above message was a telegram that MLK sent to the Latino American Civil Rights activist Cesar Chavez during his 25 day fast in Delano, California for the rights of workers. The telegram was sent a month prior to MLK’s murder.

What MLK’s telegram embodies is the need for Black, Latino, Asian, or Gays, Lesbians, Bisexual and even the disabled in America to come together due to the similarity we share in the continual struggle to attain equality for our different, but not divided, communities.

While it has been forty-six years since MLK departed and minorities in this country continue to struggle when it comes to combating against negative stereotypes, incarceration rates, job discrimination, graduation rates, and other matters that plague the various racial groups in this country it is the optimism for the future MLK foresaw in our future that should keep us moving forward and not backward.

In his legendary speech “I have a Dream,” MLK delivered on August 28th, 1963 on the steps of the Lincoln Memorial during the March on Washington calling for the end of racism in the United States of America, King dreamed of a future where everyone would be united. We should all continue his dream for solidarity among our various communities regardless of race, gender, and sexuality in order to bring on a better tomorrow.