Before she was supposed to start work at Jet’s Pizza in Mansfield, Texas, she shared her feelings about her new job on Twitter.

“Ew I start this fu** ass job tomorrow,” wrote the Twitter user Cella with seven thumbs down emojis on the post. 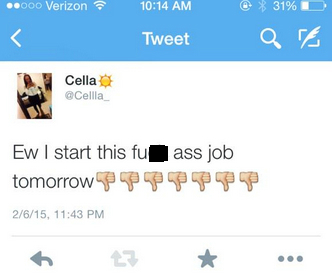 Unfortunately for Cella the owner of the pizza franchise, Robert Waple, saw the tweet and responded that she was fired and he wished her luck with her “no job life”.

“And… no you don’t start that FA job today!” Waple wrote while adding, “I just fired you! Good luck with your no money, no job life!” Oh snap, she got fired… on Twitter…smh. 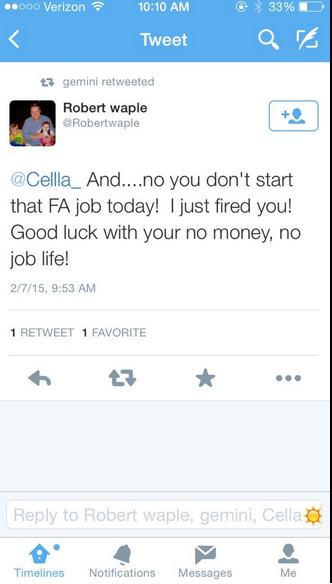 According to CBS, Cella informed another Twitter user that when she saw the tweet she called the pizza place and another manager confirmed that she was indeed fired.

Cella has responded to Waple with a tweet that said, “this is me” with an image of a female cartoon making it rain with stacks of money in her hand. Which is why she applied for a pizza job that she didn’t want… right.

Thanks to retweets, favorites and comments from people on Twitter, Cella has been trending on social media. And even though not all of the comments about Cella and her situation are positive – she’s enjoying the social media spotlight by retweeting the supportive comments sent to her.

Since the incident Cella, whose Twitter handle is @Cellla_, now has almost six thousand followers. While receiving encouraging words she’s also being informed that she’s now famous in other countries. One tweet said, “you’re famous in Dominican Republic,” while another said “famous in Brazil”. Cella is also being informed that she’s being talked about in classrooms. Hopefully they’re teaching kids what not to do on social media… hopefully!

Whether she disserves it or not people from all over the world are letting her know they got her back.

The Latino Enrollment: Where are Latinos the most Insured?
NYC COUNCIL SPEAKER MELISSA MARK-VIVERITO STATES THE CITY
Translate »
%d bloggers like this: