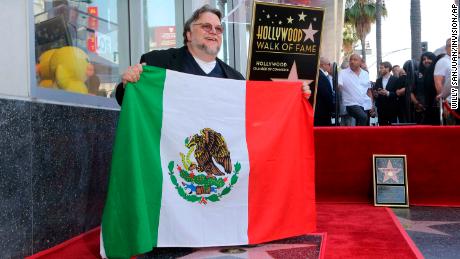 Mexican filmmaker Guillermo del Toro poses with the Mexican flag following a ceremony honoring him with a star at the Hollywood Walk of Fame on Tuesday, Aug. 6, 2019, in Los Angeles. (Photo by Willy Sanjuan/Invision/AP)

Director Guillermo del Toro wants immigrants to know they are always welcome at his star on the Hollywood Walk of Fame.

Singer Lana Del Rey, “Star Wars” director J.J. Abrams and more gathered along Hollywood Boulevard on Tuesday to celebrate Del Toro and his career, which includes directing and producing credits on films such as the original “Hellboy” and 2018 Oscar best picture winner “The Shape of Water.”

Del Toro showered his supporters with waves and hugs throughout the events leading up to the unveiling of the 2,669th star, which he dedicated to all immigrants, including himself.

“As a Mexican, receiving this star is a gesture, and no gesture right now can be banal or simple,” Del Toro told the lively crowd. “This is very important that this is happening right now because I can tell, to all of you — all immigrants from every nation — that you should believe in the possibilities and not the obstacles, ever.

“Do not believe the lies they tell about us,” he continued. “Believe in the stories you have inside and believe that we all can make a difference and we all have stories to tell, and we all can contribute to the art and the craft and the world in any way we see fit.”

Appreciating different experiences and backgrounds emerged as a common thread throughout the event. Del Rey and Abrams both praised Del Toro’s commitment to diverse, sympathetic storytelling.

“It’s a big day for Hollywood Boulevard because today we’re choosing to honor somebody who’s honored something very important in his own life and work, and that’s his own unique style of storytelling,” said Del Rey, who performs a cover of “Season of the Witch” in the director’s latest project, “Scary Stories to Tell in the Dark.” “In a culture of sameness, he’s completely himself, and that’s the greatest lesson I get from all of his tales. It’s a beautiful thing to be reminded that being different is to be celebrated.”

“Right now, we are in a moment of great fear — great fear and great division,” he said. “It’s used to divide us. It’s used to tell us that we’re all different, that we shouldn’t trust each other. And these lies make us easier to control and make it easier to hate each other. But the antidote to that is to come together, to realize that those divisions are complete fantasies. When people say you dwell in fantasy, I say, ‘I don’t.’ Politicians do.”

Also on hand were the cast and director of “Scary Stories to Tell in the Dark,” which hits theaters