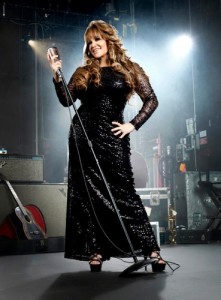 Chiquis Rivera, daughter of the late singer Jenni Rivera, will sing in the tribute to her late mother on December 9th in Monterrey, Mexico.

The free concert, which is being organized by Jenni Rivera’s sister Rosie Rivera and family will take place at the Arena Monterrey, where Jenni played her final concert the night before her tragic airplane accident, which took her life and the life of her entourage.

The Rivera family also announced the release of a new Jennie Rivera album with unreleased songs of the singer that will also include a DVD with exclusive never before seen images of Jenni.

“The album contains songs and styles if music never before revealed.” said Rosie. “I Love it, it makes me cry and smile at the same time.”

The new CD/DVD that will be released by Universal Music Latin Entertainment/Fonovisa is scheduled to go on sale Dec. 3, and will also feature music from Rivera’s final concert at Arena Monterrey, which took place in 2012, a few hours before the fatal airplane accident.

“For our family, it’s a pleasure sharing this treasure with fans of our mother, daughter and sister,” Rosie Rivera told Billboard back in October. “This effort has brought us tears and made us proud and now it gives us much happiness to continue with the company that worked with Jenni in other large projects. In honor and tradition to what Jenni Rivera is, we remain loyal to those whom have been loyal to her.“