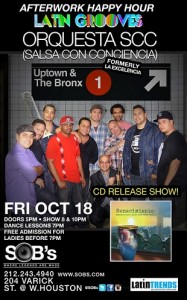 Orquesta SCC (Salsa con Conciencia) is an 11-piece salsa band based in New York City referred to by their fans as ‘The New Generation of Salsa Dura’. The band brings a modern vitality and social consciousness to the salsa genre, taking their bold sounds to salsa dancers and fans around the world. “They represent something very significant, a return not just to the classic formula of salsa but to the virtues of it,” says Aaron Levinson, a Grammy-winning producer. “They are going back to the more eclectic period when salsa was street music, playing with spirit and integrity and writing socially relevant music again.” The name Orquesta SCC (Salsa con Conciencia) pays homage to the conscience lyrics the band has become known for around the world.

In 2013, Orquesta SCC signed with Salsa Dura Entertainment LLC, a joint venture between Edwin Perez & Jose Vazquez-Cofresi to release their fourth album working together. The new album by Orquesta SCC includes 11 original songs with arrangements by Jorge Bringas and compositions by Edwin Perez & Jose Vazquez-Cofresi. Fans will enjoy the hardcore salsa sounds, danceable songs, and conscience lyrics on the new album to be released in 2013. The bands music can also be heard on radio stations, internet radio, and satellite radio both nationally and internationally. Orquesta SCC has built an adoring fan base that spans the globe, and successfully created a new revolutionary movement for salsa music.