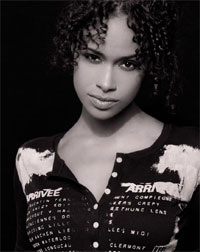 You may recognize her as officer Natalia Fowler on the daytime soap All My Children, but Shannon Kane is infamously known for her role, opposite the law, in Antoine Fuqua’s cop-thriller Brooklyn’s Finest. In a film that starred Ethan Hawke, Wesley Snipes and Don Cheadle, the seductive Kane had all of Brooklyn, NY, standing at attention, as the sultry Latina love interest (call girl) of Richard Gere. Such a first roll would have intimated any emerging actress, but not this scene-stealer.

“I was very apprehensive at first,” reveals the 24-year-old of the nudity scenes. “I’m very free with my body but when the world sees it, it’s a whole different story. Once I saw the work and understood what direction it was going, in making it real, I was very enthusiastic of bringing this vulnerability to her as a woman.”

The Kalamazoo, Michigan native, first break came as a serial extra on CSI Miami in ’06 and then Entourage, the following year. By 2008, the newcomer landed a lengthy stay on the set of All My Children and hasn’t looked back. Now, with over 100 episodes wrapped, a major motion picture under her belt, and with two more films lined up — including the Benny Boom directed sequel to SWAT, S.W.A.T.: Fire-Fight and a romantic-comedy — the up-and-coming starlet is enjoying the ride.

“I love comedy,” she says. “Martin Lawrence is one of my favorite comedians…I love his stand up. My ultimate goal is to work with Quentin Tarantino, because that’s sort of that dark comedy as well.” So what’s her favorite punch line? “I’m [all] about laughing. There’s nothing really in particular that I do, except maintain laughter for my friends, family and myself. That’s what I enjoy about acting, is being able to express every part of me.” She so crazy. — Thomas A. Harden

Gossip: Jersey Shore on the cover of this week’s Village Voice
Perez Hilton: 15 Years in Jail?
Translate »
%d bloggers like this: