Lifetime’s ‘Devious Maids’ Gets Picked Up For Second Season

Lifetime’s ‘Devious Maids’ Gets Picked Up For Second Season 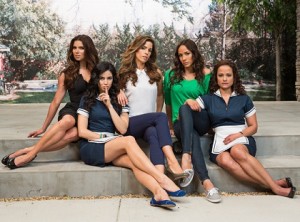 “One of the most daring series on television, “Devious Maids” has quickly become a hit. We are very proud of the show and are delighted to continue our partnership with Marc Cherry, Eva Longoria, Sabrina Wind, ABC Studios and Televisa USA. I am thrilled we are bringing “Devious Maids” back for a second season to lead our scripted slate in 2014,” said Rob Sharenow, executive vice president and general manager of Lifetime, in a statement.

“Devious Maids” which was initially passed by ABC and picked up by Lifetime follows the exploits of five ambitious maids (Roselyn Sanchez, Ana Ortiz, Dania Ramirez, Edy Ganem, and Judy Reyes) as they work for wealthy Beverly Hills residents. The show premiered on June 23rd with a modest 2 million viewers but has since then been watched by nearly 23 million viewers. It is also Lifetime’s fastest-growing drama in the network’s history, and has landed Lifetime in first place among cable networks in the Sunday at 10 p.m. time slot.

The series drew much criticism in the beginning within the Latino community about perpetuating negative stereotypes which Longoria defended. “When people talk about stereotypical maids, these maids are anything but. I think it’s important for us to have a dialogue of identity in our culture, and even though this show may not be your experience, it is a lot of people’s experience.”