Whether getting down in a nightclub, enjoying a cookout with the familia, or jamming to your playlist – the secret to getting the party started is a lively Tito Puente mambo.

We can’t celebrate Hispanic Heritage Month without celebrating the legendary virtuoso and Latin music genius – Tito Puente. The prolific musician, bandleader, composer and arranger recorded over 100 albums, winning many awards during an illustrious 50-year career. He mastered mambo, son, salsa, bossa nova, merengue and cha-cha-chá styles. He played the timbales, piano, percussion, drum set, saxophone and vibraphone. He performed 200-300 dates yearly, and was known as the ‘King of Latin Music.’ Tito was to timbales what Miles was to the trumpet, Hendrix to the electric guitar, Coltrane to the sax. ICONIC. 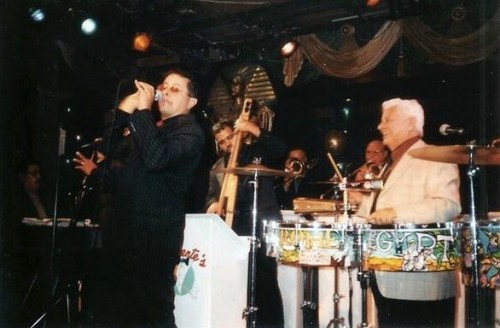 His award-winning musician son, Tito Puente Jr., carries the maestro’s name, infectious smile, larger than life spirit, bravura showmanship and passion for sharing Latin jazz with the world. He keeps his father’s legacy alive, while leaving his own mark on the world of music.

“Growing up, I watched this incredible man playing the timbales for thousands of fans, hearing the boisterous sounds of mambo coming from the stage,” Tito Jr. shared. “It was an incredible experience to witness his magic as a kid.”

But, heavy metal was Tito Jr.’s first true love. And, his iPod is proof of this.  “In the 80s, I was listening to Bon Jovi, Metallica and the likes. That was my thing – playing the drums and rocking out.” In his late teens, he hit the road with his father. Working as a drum tech, he learned how to travel with a band, conduct an orchestra, and present an extraordinary performance. He was militant in perfecting his craft, he explains. “My dad was a powerful entity, performing the high standard of bandleaders from the 1950s. If you couldn’t play in the Tito Puente Orchestra, then you weren’t a good musician.”

While on the road, Tito Jr. also gained a deep respect for the Latin rhythmic pattern – clave. This peaked his interest in mambo, much to his dad’s support. “He encouraged me to formally study music, get an education and pay my dues like he did.” The eager, young musician attended Five Towns College, learning the technicalities of reading and writing music. “Pops wanted to make sure his music was presented in the correct way, and I try to do the same with my music today,” he recalls. “I also learned how to be a good father from him. When my children are older, I’d love to bring them on the road just like my dad did with me.”

On a personal level, Tito Jr. shares fond memories of the man behind the music. “My dad loved making a mess, especially when he was cooking. From pasta sauce to arroz con habichuela – a lot of food all over the place, even on him!” He stops to chuckle, then continues the endearing story. “If you look at some of the old black and white photos of him, you might see a stain on his shirt or tie. He had to tuck a napkin – or several napkins – in his collar, and my mom was always cleaning up after him.”

Not only was his father music royalty, but so was his godmother – Celia Cruz. “My dad and Celia were very close, and she became my madrina,” he continues. “She used to call me ‘Titico’ and I remember her fondly.” One of his most unforgettable concerts was playing alongside his dad, Celia and La India at Toronto’s Skydome.

His determination to continue his dad’s momentum is a beautiful thing. “Today’s youth didn’t experience Tito Puente, and wouldn’t know his energy. I teach them about him, and the essence of Latin music so they know how it started and where that big band mambo sound comes from,” he said, recalling his father’s humble beginnings in the barrio to becoming a worldwide superstar. When introducing youth to his dad’s music, he starts off with the 1957 recorded ‘Dance Mania’ Vol. 1 and 2, with the much-celebrated ‘Ran Kan Kan’ song. “It’s an essential album that was recorded live, in one take, and is really something special.” 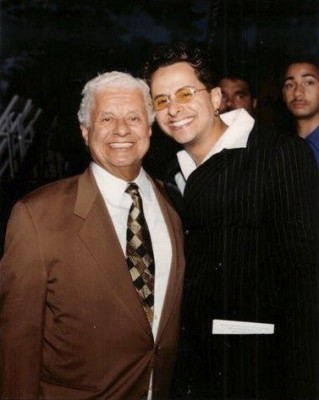 “My father had stardom, power and spirit – the staple of Latin music and American music for that matter.” Having access to Tito Puente’s enviable vault of over 10,000 arrangements is not lost on his son. When selecting music from the collection, his mom joins in on the process. “She gives me a timeline of when a particular tune came out, and tells me the back story of the song,” he goes on, “For example, she’ll tell me Pops was in a freezing basement in the barrio when he wrote that song in the winter of 1968.”

Tito Jr. continues to record and perform his father’s repertoire, adding his own flavor to the music. With his latest album, Got Mambo? (www.cdbaby.com), the classics meet new music. “For this special album, I went through hundreds of my dad’s arrangements to handpick songs, included my own music and featured several great artists,” he said.