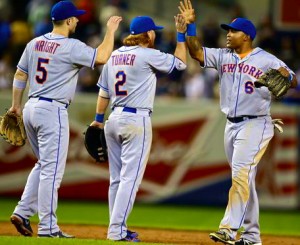 Mets players high-five one another after completing a Queens-Bronx sweep of the Yankees in this year’s Subway Series.

New York Mets fans are unlikely to witness their team make it to the playoffs this season, but at least they’ll have Subway Series bragging rights for the next year.

Prior to Thursday's series finale, the Mets defeated the Yankees 2-1 on Monday and Tuesday at Citi Field, then won Wednesday's game in the Bronx 9-4.

Overall, the Mets have won five straight. The Yankees, on the other hand, are in the throes of a five-game losing streak.

Miguel May Be Sued For Billboard Awards Performance
“The Voice” Coaches on “Oprah’s Next Chapter” This Sunday
Translate »
%d bloggers like this: