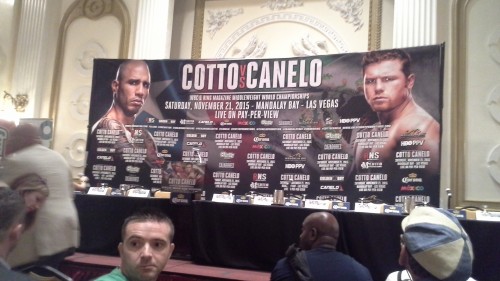 It was loud. It was passionate. Its what you can expect at a boxing press conference open to the public. Add to it the fact that two prominent champions, one from Mexico, the other Puerto Rico are slated to fight.

The Windham New Yorker Hotel in New York City was the third stop on the Miguel Cotto vs Canelo Alvarez boxing tour. There was a crisp feeling in the air of a happening yesterday. The Mexican contingent drowned out the Puerto Rican supporters.

Especially when Canelo made his appearance, the crowd went ballistic. When Cotto arrived, there was booing throughout. Also in attendance was Golden Boy Promotions head Oscar De La Hoya and partner Bernard Hopkins and WBC President Mauricio Suliaman, were present among others.

The joint Canelo Productions, Golden Boy , RocNation, and Miguel Cotto Promotions were the players that made the agreements that made this WBC Middleweight championship match a reality. Cotto (40-4, 33KO’s), the WBC, Ring Magazine, as well as Lineal champion will be matched against a former two time champion in Canelo(45-1-1, 32 KO’s).

The Mexican vs Puerto Rico rivalry was the theme of the press conference and what gives this match its extra appeal. This was stressed throughout.

“I remember a fight I was involved in with Felix Trinidad.”

“Thats the last time we saw passion and this type of energy.”

“They are defending their countries. Its gone on for many years.”

“Alot of great Mexican and Puerto Ricans fighters, its a throwback.”

Maurico Suliaman, WBC President, is well aware of the rivalry with his organization based in Mexico. He compared it to past legendary fights.

“Anytime a Mexican or Puerto Rican are in the ring, its got to have one of the greatest fights.”

In post Trump America, Mexican fans have been looking for a way to express themselves on the world stage. Through Canelo Alvarez they have found it and in Las Vegas, Nevada on November 21st, an ancient rivalry continues. As Hector Soto, Vice President of Cotto Promotions pointed out, “There will be no dancing, no hugging, and no playing. This will be a real fight.”