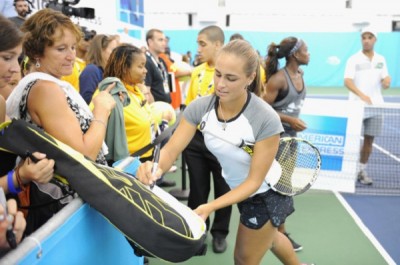 Puerto Rico has never been able to produce a potential singles star in tennis sports history. A young woman from Hato Rey is poised to change that as she has slowly worked small significant victories to personal highs. Currently ranked 69 in the World, she was as high as 41 in May when she won her first WTA title in Strasbourg.

But Monica is hungry to reach the elite level as shown by her hiring of coach Antonio Van Grichen, who worked with #1 women’s player Victoria Azarenka. Monica has won a gold medal at a regional games. She has four ITF titles and made her deepest run in a Grand Slam tournament, falling in the fourth round at last year’s Wimbledon.

As a Latina she has gained a following in the traditionally more louder U.S Open, something that makes it differ from tennis other major title cities. She credits her determined rise to a philosophy called “Pica Power.”


“It’s like a picking away at a stone until it becomes perfect.”

Monica has seen those start to produce results. Puig rallied to defeat T.Smitkova in the opening round after losing the opening set. Today , as of a few moments ago, however, in a three set duel with #18 ranked, A.Petkovic, Monica’s mistakes cost her in the clutch. After winning the first set, Petkovic won the second, and in the third, they went to a third set tiebreaker, with Puig falling short 7-5. Despite this result, Monica determination in defeat has put the tennis world on notice that Puerto Rico has a player to be dealt with in years to come.

Three Romantic Things To Do On Your Next Vacation
Lilian Garcia: The Latin Diva of Wrestling