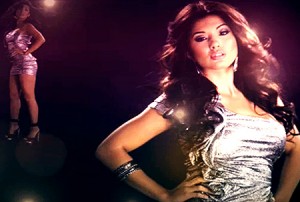 Telemundo’s mun2, the #1 Hispanic lifestyle cable network for today’s young Latino Americans (YLAs) aged 18-34, is turning up the heat Sunday nights with a brand new reality series “Beauties & the Boss.”  The one-hour, highly entertaining reality series is sure to satisfy your guilty pleasures as we go inside the life of Monica Weitzel, the young, Latina CEO of Assorted Flavors Agency, a Los Angeles based promotional modeling agency.  With Monica comes a roster of sexy, bold, and unpredictable promo-girl beauties who take on the city of Los Angeles by day and spice up the nights during their exciting and glamorous work assignments.  “Beauties & the Boss” premieres Sunday, June 19 at 9 PM ET on mun2. For a sneak peek of the series, visit http://x5studios.com/Beauties4/.

Running a successful promotions modeling agency is no easy feat, especially when you’re Monica.  From juggling her models’ schedules and wild personalities, to their love triangles and arguments, Monica knows she has to keep it real and “handle” these fiery beauties whom she relies on to build her growing business.

“We’re very proud of ‘Beauties & the Boss’,” says Diana Mogollón, General Manager for mun2.  “We want our viewers to feel like they are part of Monica’s world.  We want them to live the excitement and the drama and be inspired by her drive and success.”

“mun2 continues to bring Latinos into the reality world, and Monica is the perfect example of a Latina creating a business that many people have seen but few people know about,” says Flavio Morales, SVP Programming and Production for mun2.  “Like the models, the show is sexy, fun and uniquely American, and will make for some great summer television viewing.”

In the hour-long reality show, we meet some of Monica’s top models and immediately get caught up in the excitement and drama surrounding this group of beautiful women, who don’t always get along but must work together as Assorted Flavors’ promo girls.  Meanwhile, back home, Monica’s traditional Latin family keeps her grounded as she reaches for her dreams.

Assorted Flavors provides models for a wide range of promotions and Monica is in charge of selecting the right models for each event.   Assorted Flavors roster of beautiful women and men reflects the wide range of ethnicities and flavors of Latinos in LA.  Whether a nightclub promo and a boxing event or a car and trade show, it isn’t a party unless the promo-girl beauties have checked in.

mun2.tv/boss will offer viewers interactive videos that allow users to learn how to be a promo model and also how to bring up their game according to the Assorted Flavors’ beauties, offering viewers different scenarios throughout the videos.  Also, as part of the fifth year celebration of hit webcam interviews featuring celebrities and their biggest fans, mun2.tv will connect two of the promo models with their biggest fans mid-season.  The website will also allow viewers to interact with the beauties on mun2.tv/ppl where each beauty will interact directly with their fans, answer viewer-submitted questions and share behind the scenes scoop and photos from the series.  For more information on “Beauties & the Boss,” visit mun2.tv/boss.

As Census figures show, Latinos are the nation’s fastest growing and youngest demo group, quickly becoming the new mainstream, general market consumers.  As the #1 Hispanic cable lifestyle channel among YLAs, mun2 is leading the way with an impressive 42% year-to-year growth in persons 18-34 in total primetime and delivering a 72% share of YLAs.

mun2’s premiere Sundays kick off on June 19th at 9pm ET/PT with “Beauties & the Boss,” followed by the hit series “RPM MIAMI” at 10pm ET/PT.

“Beauties & the Boss” is an ensemble of real life Latinas with whom anyone can relate.  The series features Monica, her family, and a roster of aspiring singers, dancers, actresses and models whose real life stories would make anyone laugh, cry and be inspired.  Meet Monica and her promo girls (and guys):

MONICA, 31 – Ventura, CA.
Monica Weitzel is the owner and founder of Assorted Flavors Agency, a promotional modeling service located in Los Angeles.  She’s a beautiful, driven and confident small business owner who can be a quick-tempered perfectionist, but after hours she knows how to let her hair down.

DIANE, 25 – Houston, TX.
Diane Gonzales is a Mexican beauty and aspiring sports journalist who uses her sexy looks to get ahead.  She’s a proud Latina who’ll stop at nothing to get what she wants.

JENN M., 22 – San Fernando Valley, CA.
An aspiring singer/actress/model who has appeared in several music videos, Jenn can be a misbehaving brat.  Her constant desire to create conflict sometimes gets out of hand.

JEN C., 23 – Whittier, CA.
Jen is a gorgeous and statuesque model who prides herself on being professional at work.  But this quiet beauty has no problem telling her fellow colleagues or customers to buzz off.

KARINA, 27 – Laredo, TX.
Karina is a model and nutritionist.  She is a feisty young lady with tons of personality but she’s prone to gossip, which sometimes gets her in trouble.

LARA, 21 – Calgary Alberta, Canada
Lara is a blonde bombshell from Canada who wants to become a professional makeup artist.  She is sweet but can be a little naïve when it comes to men.  Good thing her fellow Canadian roomie and best friend Liz is there to keep her in line.

LIZ, 23 – Vancouver, Canada
Liz is a pretty blonde with an edge.  Originally from Canada, Liz moved to LA to work as a professional dancer and “pays the rent” as a promo model.  She lives with her best friend and compatriot, Lara.

NATALIE, 22 – Diamond Bar, CA.
Natalie is Monica’s best friend and her go-to girl when Monica’s personal or professional life is falling apart.  Natalie is a former promo girl who has gone on to record an album and doesn’t hold back from letting the new girls know she’s an original member of the crew.

NICK, 23 – Moorhead, MN.
Nick wants to be an actor but is currently pursuing a business degree, just in case.  He is a successful male promo model often referred to as an Abercrombie & Fitch type.

MARKOS – 24, Los Angeles, CA.
Markos works as a promo model while pursuing his true love of music.  This good looking, outgoing guy plays guitar for an 80’s cover band and always manages to attract the beauties.

KEENAN, 26 – Culver City, CA.
Keenan is the company’s security guard.  He accompanies the promo girls to every event, making sure that none of the customers get out of line with the girls.  Although it’s against company policy, Keenan wouldn’t hesitate at all at the chance of dating one of the girls.

ROMEO Surprises the Fans at the PR Parade!
A Better Life casts a Light on the Invisible
Translate »