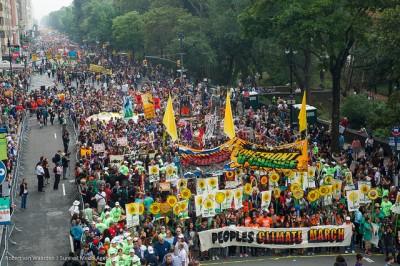 This pass Sunday New York City became a stage for the latest round in trying to push for a greener initiative in order to bring climate awareness to the world. An estimated 300,000 marchers ventured out to Columbus Circle on Sunday to partake in the People’s Climate Change March which started in the area, ventured out across Central Park South, down Sixth Avenue, along Times Square, and then west to the Hudson River where it came to an end.

On their website, the People’s Climate March calls out for everyone from New York City to across this country and the world that “to change everything, we need everyone.” And on Sunday, and still in part today, the event appeared to inspire people to take action. According to the site, across 166 countries a total of 2,808 events took place to take part in this international event thus becoming the first largest climate march in history.

Sunday’s march consisted of a large, diverse crowd—myself included, I unfortunately suffered an ear injury and am now paying for it but…for the cause. From as far as New Jersey to England to India people from various backgrounds and numerous causes impacted by the recent dilemma regarding the climate change took part in the march. Even actor Leonardo Di Caprio, a known activist for Climate Change Awareness took part.

The march was by far anything than a regular march. People came together to express the importance of climate change awareness through marchers consisting of dancers, myriad of decorative costumes, and bands of music players. Despite the interesting spectacle the crowd was largely there to bring awareness to the importance of going green and preventing further denigration of our climate due to the lack of governmental concern.

The primary cause for the march on Sunday was to make aware of the rising problem regarding greenhouse gas emission. Wanting to bring a halt to the man-made phenomena, the march was aimed at bring a halt to the emissions that has been largely connected to recent droughts, floods, hurricanes, and even pestilence within some countries.

The march was relatively peaceful and didn’t involve any arrests. The group of marchers mostly stuck to rules posted on the People’s Climate March‘s website which also consisted of marching orders for the crowd. In fact, the march array of singing, instrument playing, waving of banners, and celebratory smile didn’t create an atmosphere of a march but a peaceful parade for a rather good cause.

Sunday’s event even inspired a lesser crowd to do it all again on Monday. However, this time marchers decided to walk on what is considered by some to be one of the hotbeds causing the negation to realize the importance of climate change prevention: Wall Street.

Although trying to keep to its peaceful tone, the second—albeit random—day of the march wasn’t as peaceful.

Unlike the People’s Climate Change March, the Flood Wall Street march started in Battery Park where members gave advice to participants on how “not to get arrested”. The Flood on Wall Street was unofficial and didn’t contain any permits.

The reason why some marchers—about a 100,000 or so—from Sunday decide to get behind this event and take the push for climate change awareness to Wall Street is because of the notion that “corporate greed” aids in its continuation and lack of government or corporate involvement.

From mining to burning of fossil fuels, corporations largely do not see the benefit in taking part in any green initiative because for them it means a hole in their very large pockets. Also, some find that capitalism is one of the doers in causing the environmental devastation because of its inspiration of greed which if not stopped could see the planet falling into devastation.

“When Wall Street fails you, the earth will be there,” expressed Vandana Shiva, a marcher who came all the way from India. Shiva also talked about how with the rising waters in Bangladesh something must be done in order to save the country, and the world. Despite a not-so-good outlook, she still manages to hold onto hope things will change.

Various authors and activist writers took part in Monday’s event where they shared their theories and explain why Wall Street and Capitalism are culprits behind climate change.

With no microphone or speakers authors and activists like Naomi Klein discussed the issue of “capitalistic excess” detailing how the aggressive pull for gain is causing harm among the crowd. Despite no way of speaking loud for everyone, participants took part in a kind of game of telephone in order to pass the message along.

Once the speeches and prep was over, marchers flooded Wall Street
Somewhat following Sunday’s march, Monday’s marchers went towards Wall Street dancing, singing, and waving banners and posters. Some marchers even took up chanting. The chants consisted of accusation made against corporate and financial sectors in the world for being one of the largest obstacles when it comes to challenging climate change.

“People gonna rise like the water, We’re gonna calm this crisis down, I hear the voice of my great granddaughter, Saying shut down Wall Street now!”

As the flood of marchers got closer to Wall Street, the presence of police officers from the New York City Police Department started to increase. Tensions first arose between the crowd and officers after two very large balloons with “Carbon Bubble” written on them were playfully bounced around like a beach ball in a concert came to an end when officers snatched and deflated them. The act created a stir of boos from the crowd.

The Flood on Wall Street resulted in two arrests. One of the arrests wasn’t truly unauthorized marching caused, but the arrest was after a young man would not descend from a payphone after being warned by police to do so. As for the second, the second arrest—and this probably is a symbol if you want to look at it as so—was a polar bear.

At the United Nations yesterday, New York City Mayor Bill de Blasio took part in the summit regarding the issue of climate change currently occurring at the UN. The mayor was among a list of speakers today from Leonardo Di Caprio to Secretary-General of the United States of America Ban Ki-moon, and when it was time to speak he spoke about the need to combat climate change.

“We know humanity is facing an existential threat. The cause is us: how we heat our homes, how we transport ourselves, the reckless way in which we live. This is an issue we all face — no one is spared — and our mutual need to survive should instill in us a kind of unity we too rarely experience.”

Before the summit, Mayor de Blasio mentioned how NYC’s fight to fight against greenhouse emission began while Michael B. Bloomberg, and while he praised the former mayor’s efforts he promised that his would not only be bold but go further in the fight.

To help fight against climate change and greenhouse emission you can do so much more than recycle or conserve your energy and decrease your greenhouse footprint. To take part in public programs check out the People’s Climate March and see what you can do!