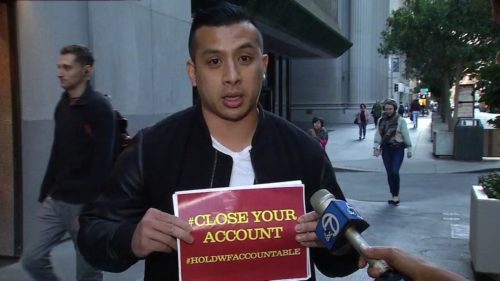 Eight months after Wells’ phony-account scandal was exposed and four months after the city’s Finance Department signed a new deal with the bank — Mayor de Blasio and Comptroller Scott Stringer announced the Big Apple was cutting certain ties to the bank.

The sham-account scandal led to millions of dollars in federal and state fines, the firing of the banks chief executive, lawsuits and hundreds of employees getting being let go.

“We want to send a message to this bank and the broader industry that ethics matter,” de Blasio and Stringer said in the statement.

The moves against Wells include a prohibition against the bank selling city municipal bonds, which are used to fund day-to-day operations.

The NYC-Wells Fargo divorce won’t take full effect immediately. The city is stuck with Wells Fargo to collect taxes and fees until Dec. 31, 2020, when the contract expires, although there are rumors that lawyers are looking into getting out of the contract on a legal technicality.

As for Wells Fargo, the bank, in a statement, said it “appreciates the continuing dialogue with New York City and deeply values our relationship with the City.”

Thousands of employees at the San Francisco-based institution were caught last year creating 2 million unauthorized bank and credit card accounts to make sales targets.In 2016 Wells Fargo’s board of directors has stripped CEO Tim Sloan , see image below with injured hand (which we assume did not happen by punching a wall for not getting his hefty bonus) and seven of his top lieutenants of their 2016 bonuses as the bank seeks to hold management accountable for recent stumbles. The board took further punitive action by chopping in half stock awards that these leaders were due to be paid. 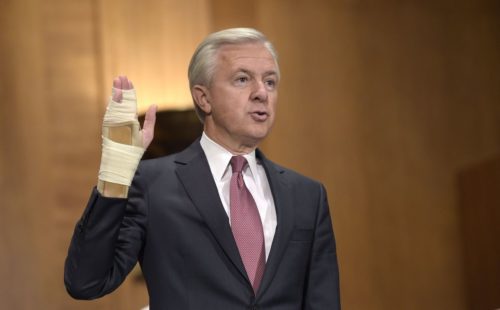 The mayor and comptroller said they’ll have the New York City Banking Commission vote “to prevent agencies from entering into new banking services or related contracts with Wells Fargo, as well as bar agencies from renewing or extending existing contracts on expiration,” according to the statement.

“I encourage Wells Fargo to quickly clean up its act and do right by the millions of customers who trust the bank with their savings,” de Blasio said in a statement.

Stringer, the city’s comptroller, had harsher words for the scandal which led to the firing of 5,300 Wells Fargo workers for creating some two million fake accounts. “What happened at Wells Fargo was a fraud — and there should be consequences. We need to send a message to this bank and the broader industry that ethics matter,” Stringer said.

The federal legislation encourages banks to invest in low- and moderate-income communities. Wells Fargo acted on this recommendation, they did this so well that the city of Philadelphia accused Wells Fargo in a lawsuit of discriminating against minorities by pushing them into higher-cost mortgages. WELL, WELL, WELL! Maybe people and its communities should bank and do business with people and entities that reciprocate with the people in that community they do business with and make money from, if they don’t, do business with someone else, its that easy. It has to be a two way street, not a one multiple lane highway going only one way. That’s highway robbery!