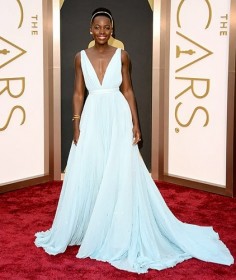 Lupita Nyong’o… the 12 Years a Slave Best Supporting Actress Oscar winner has proven herself to be Hollywood’s new “It Girl”, taking the film industry by storm in the last several months with her flawless beauty and amazing acting abilities and Red Carpet Glamour. And to make her even more unique many will be pleased to learn that this actress of Kenyan descent was actually born in Mexico and she speaks perfect Spanish!

“I was born in Mexico because my father was teaching at a school in Mexico City,” the 30-year-old actress explained in Spanish during an interview with CNN en Español back in February before winning an Oscar for Best Supporting Actress.

“I was born during the third year he [referring to her father] was there. And when I was 16, I returned to Mexico to learn Spanish. I lived in Taxco, Guerrero and attended the UNAM, the Education Center for Foreigners. I lived there for seven months, and I loved it.”

Nyong’o, who answered all of CNN’s questions in Spanish, also spoke about the transition of moving from Kenya to Mexico as a teen and why she fell in love with the country.

“Mexico was very strange to me, coming from Kenya, but I found such friendly people and fell in love with the food,” she said. In fact, she loves the food so much, she still grabs her favorite bite — steak tacos — before heading down the red carpet.

“I still have a lot of friends [in Mexico] and I hope to return soon. I miss Mexico,” she added.

“The nominations are changing my life and I am enjoying it a lot because I am encountering people I admire and have touched my heart and even changed my idea of how I am as an actress like Kate Blanchet who is a awesome actress and Oprah, which was quite an emotion for me when I meet and spoke with her.”

“All of this is changing me a lot, it’s hard for me to say at this moment how much all of this is going to change my life moving forward.”

“Right now I am just enjoying and living in the moment, in the present and hoping all will go well.”

Things are surely going well for you Lupita!

How to Successfully date a Latina Professional in NYC
The Happiest Song Plays Last: An interview with Latino ARMANDO RIESCO
Translate »
%d bloggers like this: