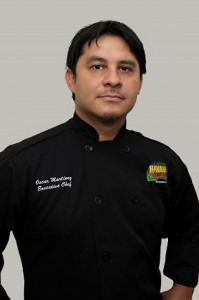 Oscar Martinez’s first memories are of being in the kitchen with his mother. Being of El Salvadorian descent he knew how to cook Hispanic staples such as black beans and rice as early as six years old. He craved being in the kitchen and learning from his family, specifically his mother. She taught him true farm-to-table techniques such as the butchering his own meat and piqued his interest in gardening.

Martinez says, “I’ve felt the passion for cooking from a very young age. I translate that into creating meals and entertaining guests.” At the age of 18, he took that passion and he moved from his home in California to New York – the Mecca of food. In New York, he enrolled in the culinary program at the New York Restaurant School to start his dream of becoming a chef.

Merrin sparked a curiosity in Martinez, with his charm and passion for Latin cuisine. Martinez saw an opportunity to join a concept and brand that he really believed in, so in June 2012, he joined the Havana Central team as executive chef.

Martinez says it’s been an honor to be able to come full circle with his career and finally get back to his Latin food roots. While with Havana Central, Martinez has had the opportunity to open Havana Central’s newest location in Long Island, New York.

Martinez looks forward to a long tenure with Havana Central saying, “There is nothing better than the culture and ambiance of working with Spanish food. To me one of the most rewarding things in life is when someone says, ‘that meal was awesome!’ Working with the people and food at Havana Central is better than working at any four star restaurant because it’s like being… home.”

1. Heat a paella pan over medium-high heat, and coat with olive oil. Add onions, garlic and sauté for two minutes.

2. Add the chicken and chorizo, cook for 1 minute.

3. Add the tomato, peas, pimientos. Season with salt and pepper.

6. Cover, reduce heat to low, and simmer until all of the liquid has been absorbed.