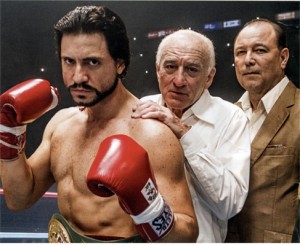 Panama’s most famous boxer, Roberto Duran, is getting a biopic!

Backed by a $17 million budget and an All-Star Cast that includes: Edgar Ramirez (of the Carlos miniseries fame) as the boxing legend, motion picture royalty Robert De Niro as Duran’s famed trainer Ray Arcel, and singer Usher as one of Duran’s fiercest rivals, Sugar Ray Leonard. Rounding out the cast is Ruben Blades as boxing promoter Carlos Eleta together with Ellen Barkin and John Turturro.

The Duran biopic is titled, Hands of Stone taken from Duran’s nickname “Manos de piedra,” During one of his most infamous fights, Roberto Duran called it quits during a rematch with Sugar Ray Leonard back in 1980. He waved his hands to the referee who called out, “no mas.” More than thirty years later, people continue to speculate about the bout.

Was it Duran who said, “no mas” or was it the ref? There’s even a documentary called No Mas that brought the two fighters together to discuss the controversial match.

“The infamous “no mas” fight is the biggest enigma in the history of boxing. This movie will answer the enigma, with the best talent any director can possibly dream” said Venezuelan filmmaker Jonathan Jakubowicz who directed and wrote Hands of Stone.

The Duran biopic wrapped up filming in Panama last December and moved the shoot to New York. Hopefully, Hands of Stone will be coming to a theater near you very soon.