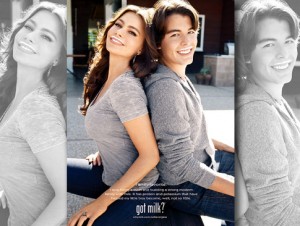 To fans, she’s a curvaceous brunette bombshell who plays a fiery housewife on “Modern Family.” But to her 19-year-old son, Sofia Vergara is just mom.

The Colombian actress is the latest celebrity to wear the iconic milk mustache for the “Got Milk?” campaign, posing back-to-back with son Manolo in the photo.

While she is usually seen walking the red carpet in body-hugging dresses, Vergara dresses down for the ad, donning a pair of jeans and casual gray t-shirt to match her son.

“I love being a mom and building a strong modern family with milk,” the ad reads. “It has protein and potassium that have helped my little boy become, well, not so little.”

Having her son at a young age has put Vergara in plenty of interesting situations – and given her a bounty of amusing stories to tell.

“Usually people think we’re brother and sister,” the actress once told People magazine of Manolo, whom she named after a character in “Scarface.” “But sometimes they think I’m his girlfriend. He will call me ‘Mom’ so they know!”

And this isn’t the first time Vergara has worn the infamous milk mustache. The actress, who got her start modeling, previously posed in a Spanish language “Got Milk?” ad in 2006.