The Latino Enrollment: Who are the Latinos enrolling or not enrolling to become Insured?

The Latino Enrollment: Who are the Latinos enrolling or not enrolling to become Insured? 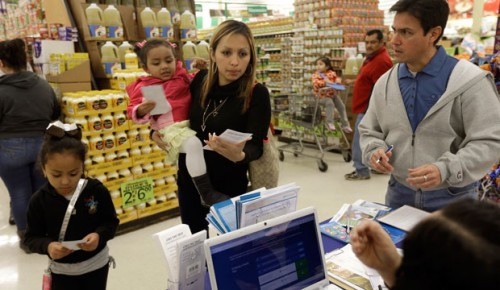 For the last installment regarding Latinos and their part in enrolling and becoming insured due to the Affordable Care Act we’ll be looking at who among the Latino community are taking a part of or failing to sign up for the benefits offered by the ACA. So who are the Latinos to be questioned when it comes to enrollment in ACA?

According to an analysis report by the Pew Hispanic Center, 15% of Latinos of Spaniard origin & Latinos of a Caribbean-oriented area like Puerto Rican descent tend to be more insured in the country but Latinos with association to Latin American countries like Honduras, Guatemala, and etc.

For foreign-born Latinos who come from one of the Latin American countries, enrolling isn’t an option due to the fear that their undocumented status may deny them enrollment and possibly exposure to being in the country illegally.

According to findings complied by both Enroll America and the United States Department of Health and Human Services (HHS), the legal status of Latinos is one indicator to why there isn’t a higher enrollment of Latinos. Also, U.S.-born Latinos who may enroll may also be hesitant due to the fear mentioned above regarding exposure.

However, while it hasn’t been determined why—as of yet—it appears this fear may be dissipating because the HHS is reporting that there is an increase of Latino enrollment. The fear of status may have been one issue for a lack of enrollment.

Another issue regarding the lack of enrollment experience the first enrollment period could be linked to the hindrance of the ACA website geared towards Spanish-only speakers which did nothing to help.

During the first enrollment period there was trouble with the Latino website devoted to those who could only speak Spanish. The website site experienced numerous problems when it launched in October 2013. The issues involved glitches due to tildes and accent marks, and it also made needed information inaccessible or created confusion due to the information it provided to Latinos who only spoke or read Spanish.

“Something as simple as having a tilde or an accent in your name caused technical glitches last year,” said Mayra Alvarez, the Director of State Exchanges for HHS on the issue with the website. Alvarez went on to address other issues that have been addressed, “Those small issues combined with complex family situations, whether complex immigration of complex financial situations, made Latinos particularly susceptible to technical challenges.”

Another indicator of why some Latinos enrolled and others did not was due to economic status.

According to findings by the Kaiser Family Foundation, within Latino households there was expecting to be one member of the household to have a full-time job which offered insurance for the family. However, in some incidents the worker may not have been earning enough to pay for private insurance which kept Latinos typically at a low standing when it came to be insured in the country.

Prior to ACA, in 2013 it was discovered that of the 71% of the population was covered by private insurance only 39% of Latinos were insured as well. Among the estimated uninsured who are considered relatively poor, Latinos are high among that number and makes it an issue when trying to qualify for insurance.

“If you’re bankless, if you’re below the poverty line, we’ve seen some issues with Experian being able to verify your identify,” said Jose Plaza, the National Director of Latino Engagement with Enroll America on the issue where Latinos of poor economic backgrounds are finding it difficult working with Experian, a company employed with the task to verify identities of enrollee for the healthcare marketplace.

According to Plaza, when it is difficult to aide low-income Latinos the process is not a quick one and “The wait is longer, you have to send additional information.”

Medicaid is a government-sponsored insurance program aimed at insuring low-income Americans. There are an estimated 95% of uninsured who qualify for Medicaid, but that qualification is not being met. An estimated 4 million Latinos may be among the uninsured because they may fall below the Medicaid expansion limit or live within states that did not expand Medicaid which has become known as the gap when it comes to trying to get insured.

The goal of the Affordable Care Act was to become a way that everyone who fell under the earning amount below than the federal poverty line would be eligible to apply for and acquire Medicaid. In-addition, there were federal subsidies set for insurance purchased on marketplaces placed on reserved for people who were earning between 100% to 400% of the poverty line.

When the Supreme Court made a decision that permitted states to choose on the expansion of Medicaid there were millions of people who were left both ineligible for Medicaid and were far too poor to be able to buy insurance on the marketplaces without the needed subsidies.

However, despite the hurdles placed because of the economy, persecution because of stereotyping, or opponents of ACA, Latinos are still trying and becoming insured. During the final month in last year’s enrollment period there was a 30% jump in Latinos enrolling. Meanwhile, during this year’s second enrollment period of the 50% of people determined eligible to acquire a plan the estimation was largely Latino.