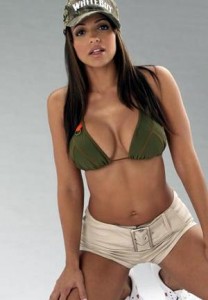 Model Vida Guerra is being sued by three dudes who went to her birthday party at a Hollywood nightclub and claim they got beat down by club employees.

TMZ is reporting that, according to the lawsuit, the brawl went down back in March, 2010 at Vanguard Club. The plaintiffs claim they were subject to a “violent attack” at the hands of the defendant’s employees … and suffered “severe physical injuries.”

The suit names Vida and the club as defendants … it doesn’t say if Vida’s famous booty had anything to do with the alleged brawl … but chances are it was nearby.

The men are suing for unspecified damages.