Who was that Gorgeous Latina with Bruno Mars’ at Grammys?

Who was that Gorgeous Latina with Bruno Mars’ at Grammys?

Did you know? Bruno Mars girlfriend, model Jessica Caban was the co-host of the LatinTRENDS 2010 Latino Trendsetter Awards. See that video below! 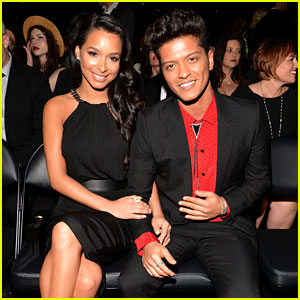 If you caught the Grammys last weekend you probably noticed that Bruno Mars showed up hand-in-hand with a beautiful Latin Brunet… She happens to be Bruno’s Model-Actress girlfriend Jessica Caban.

Now it’s no secret they’ve been dating but seeing them so close at such a high profile event is a good sign we will be seeing a lot more of the couple. We have no doubt Jessica will be accompanying Bruno to the Super Bowl for his half-time show this Sunday.

But who is Jessica Caban? Here some quick facts about this 30 year old beautiful brunet:

I. Jessica Marie Caban was born in New York City on June 13,1982. Both of Jessica’s parents are Puerto Rican and she was raised in New York’s Spanish Harlem.

II. Jessica launched her modeling career in 2002, after a nationwide search granted her the opportunity to represent Jennifer Lopez‘s line “J-LO.”

III. In 2003, Jessica appeared in Proyecto Uno‘s music video for their “Holla.”

VI. She is a model for Steve Madden Clothing at Stevemadden.com also for Coog.com & Ideeli.com.

VII. Jessica began dating Bruno in 2011 — By the summer of 2012, Jessica moved to Los Angeles to live with Bruno. The two began sharing the singer’s $3 million mansion.

VIII. In 2012 while vacationing in Hawaii Jessica seemed to have the seal of approval from Bruno’s mom

Be sure to watch Bruno Mars Super Bowl halftime show this Sunday on FOX.