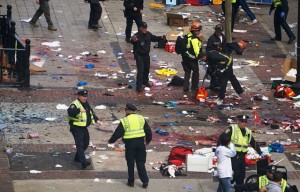 First responders during the aftermath of Monday’s Boston Marathon bombings.

“Our thoughts and prayers go out to the victims and the families who were affected by the bombings and our respect and admiration go out to the police, medical personnel and first responders who acted so heroically,” the statement reads. “We stand united with the participants, volunteers, staff and spectators of the Boston Marathon and the people of Boston.

“While we do not comment on safety and security measures at Yankee Stadium, this has always been our top priority and the public can be assured we are working with all levels of law enforcement and our own security personnel to ensure a safe environment.”

More than 180 people were injured in the bombings, three of them fatally. The attack claimed the lives of Martin Richard, 8, of Dorchester, Mass.; restaurant manager Krystle M. Campbell, 29, of Medford, Mass.; and 23-year-old Chinese national Lu Lingzi, a graduate student at Boston University.

In honor of the victims, their families and all of Boston, the Boston Red Sox’s de facto team anthem, “Sweet Caroline” (by Neil Diamond), was played after the third inning of Tuesday night’s Arizona Diamondbacks-Yankees game at Yankee Stadium.