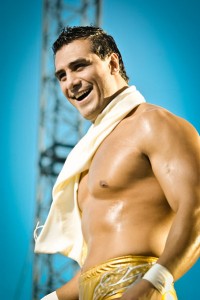 Alberto Del Rio became WWE World Heavyweight Champion earlier this month by defeating the 7-foot tall, 440-pound behemoth otherwise known as The Big Show. Now the rivals are set to face off at the 2013 Royal Rumble at the US Airways Center in Phoenix this Sunday night.

Del Rio, born Alberto Rodriguez in San Luis Potosi, Mexico, hopes to retain his title this weekend so that he could defend it at WrestleMania XXIX, which will be held at MetLife Stadium—home of the New York Giants and New York Jets—on April 7.

“I’m one step closer after the Royal Rumble, because unfortunately last year I couldn’t be [at WrestleMania] because I got hurt,” Del Rio, billed at 6-feet-5 and 239 pounds, told LatinTRENDS magazine on Friday. “That’s the reason this WrestleMania is so special for me, because it will be Alberto Del Rio’s comeback to the big stage. And as a World Heavyweight Champion, it would be even more special. My family is going to be there; I know all the Latin American community is going to be there that night.”

Added the 35-year-old Del Rio, who was a member of Mexico’s national Greco-Roman wrestling team and an MMA fighter prior to joining the WWE in 2010: “The World Heavyweight Championship is the first title I tried to accomplish when I came to the United States. Unfortunately, I couldn’t the first time, but now I’m the champion and ready to defend my title this Sunday at the Royal Rumble.” 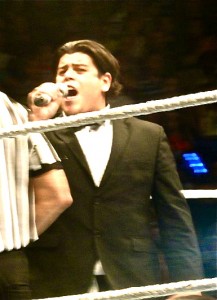 For Del Rio’s bilingual personal ring announcer, Ricardo Rodriguez (no relation), this year’s Royal Rumble serves as a vivid reminder of how quickly his life changed after he and Del Rio made their SmackDown debut on Aug. 20, 2010.

“I remember three years ago, WrestleMania was here in Phoenix—where we’re having the Royal Rumble this weekend—and I remember attending as a fan,” the 26-year-old Van Nuys, Calif. native said. “And then knowing that a year later I was going to be the first person you see when you open up WrestleMania in Atlanta, that was kind of cool.

“I think there were like 73,000 people, so I just remember seeing the wave of people,” Rodriguez, who initially tried out as a wrestler, continued. “It was such a beautiful feeling; truly a dream come true.”