A SOCCER BALL GROWS IN BROOKLYN

A SOCCER BALL GROWS IN BROOKLYN 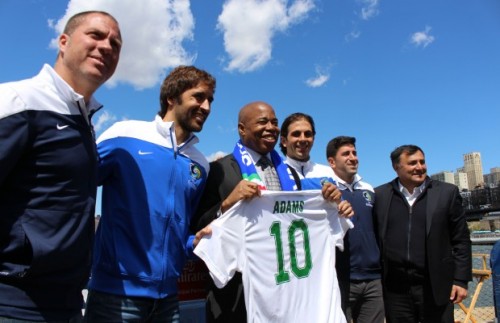 The New York Cosmos soccer team of the NASL will be making an appearance in Coney Island’s MCU Park. The special excursion the Cosmos are making this Saturday has excited many in Brooklyn who would like to see the Cosmos make it their permanent address. However the Cosmos are split on the subject as they are still awaiting their Belmont proposal which is currently in play and one that will take time to come to fruition if it comes at all.

Brooklyn Borough President Eric Adams feels that the time is right for soccer to be part of the Coney Island landscape.

“I would love to have a team here in Brooklyn,”

“Soccer has grown over the years.”

Indeed it has. Where once soccer was seen as a foreign sport it now has been played by young people who first got the bug when the Original New York Cosmos and Pele ignited the love for the World’s Game in the late 70’s.

“It has a domestic appeal.”

Adams mentioned that Brooklyn has made many appeals to the Cosmos. They cite several areas in the region rich in space and people demographically who would be natural supporters. Latinos make up 20% of the population and add local hipsters and you have real potential for a diverse fanbase.

“We are looking to make Coney Island a year long destination and this can be a great start to that.”

The only thing that can keep it a non reality is the Belmont Crossing Bid as the Cosmos search for a location they can build a soccer specific stadium.

“We are committed to being able to build a stadium. The borough that makes that happen is the one we will decide to be,”

stated Cosmos’ coach Giovanni Savarese. Until them Adams hopes that this game will plant a seed in their favor with class soccer and World Star Raul.

“Soccer will continue to grow if we bring a sports team that young people can look on TV and see their players and wear their jerseys,”

“That is a great way of growing it here.”

Indeed more than a tree can grow in Brooklyn.