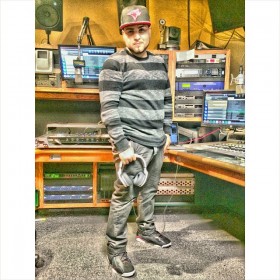 Its often said a company is only as good as the employees they have. If that’s the case, then you can’t go wrong with a 29 year old dynamo, a self-proclaimed “bookworm” who easily could have been a pharmacist or lawyer instead of an the on-air personality. AJ El Kallejero is a hard working talent, a credit to La Mega.

AJ will be the first to tell you that radio was not his original goal. He is in Rutgers University working in a program to become a pharmacist.  Now picture AJ, in white smock, preparing your prescription. ”

Radio was not my dream. (He laughs) I was in a joint program from Rutgers, Newark and Rutgers, New Brunswick.” AJ explained.  “They only take thirty people a year, fifteen on full schlolarship. I was one of them.”

But things took a turn in the form of a lady on a random evening asking opinions of the then La Kalle radio. AJ had a thought and inquired and for the next six years, at the tender age of 21, AJ was working in radio. “We were in a club and a lady was asking about LaKalle, so I walked up to their van afterwards to see if there were any positions.” Amazingly they pointed out their boss, the same lady. “It took three weeks, calling, emailing, but finally, she got back and the rest is history.”

AJ has come a long way. Proud of his Salvadorean heritage, he credits his mother for shaping his outlook. His best qualities honed through her example.

“I get my hustle from my mother. She is my main motivation.” AJ shared

It extends to his large family, seven siblings. One has Down Syndrome, a cause he is passionate about among many others. Its a personal journey he hopes will culminate in a positive destination.

“We’re a football team, all together, one direction.”

AJ worked in New York and was in Las Vegas, with Univision, and now is with SBS,  for La Mega. He gets a first hand look at all the concerts, but rarely gets to really take much in. After all, his responsibilities are numerous. “Its an awesome job, but usually I am running around, getting artists to stage, on the mic on breaks, and taking care of client needs throughout an event.” AJ admits. “I think I have only really sat down and enjoyed two concerts.”

So much goes into running a single event, and by extension a radio station that is considered number one nationally. Its an institution really. AJ agrees,

AJ tells more. “They are the most heralded station in the country. If you are an artist and want to make it in New York,

its La Mega. They break the records, and the rest follow their lead.”

AJ is one of the most accessible personalities in the business. He is a leader, far from a follower. He believes in Karma and works to build it correctly through his work. AJ had no easy way into radio and its from this perspective that he gets his drive. ”

I wasn’t grandfathered in or endorsed.” AJ reminds us. “I started at the bottom and worked my way up.” 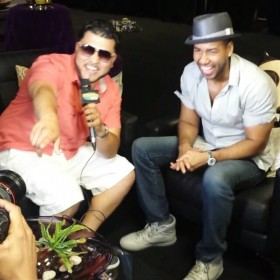 AJ is soon about to complete his masters degree in communications this spring. He sees the total picture and is looking to merge into new areas. He has drive. He points to one specific book from author Kevin Liles, “Intern to President.” AJ explains why.”This book changed my life. It instilled an idea of leadership and motivation. “AJ shared. “I plan to one day own a company.” Big ideas from a man who refers to himself as

AJ while being an on-air personality has also worked in the marketing and promotional areas of the company. He wears many hats. He understands the power of vision and reinforces it everyday by action. Don’t be surprised to walk into an office and meet the boss, it will be AJ El Kallejero. “I see this as the generation of Latinos, the future of radio. What you say and put your mind to do, you can do whatever you want.” Those are not empty words. He has already proven it can be done, so why not the rest?