The New York Liberty channeled their Latin side on “Nochelatina” night. DJ Lobo from La Mega 97.9 was in the zone and he got things warmed up for this Madison Square Garden Party. Kym Hampton, Liberty Ring of Honor legend and three time champion in Spain did the Liberty announcements in Spanish. 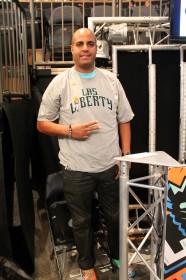 Anna Cruz of Spain, the lone Latina player on the New York squad struggled but was still an effective playmaker. Yet at crucial points in the fourth quarter made some big plays. Cruz drove in traffic for a three point play, breaking a deadlock, then two plays later stole a pass at the key and in transtion found Swin Cash for layup to put them up by two with 7:01 remaining. With only 43 seconds left and the Liberty with a 64-61 lead Cruz drove to the paint with a serious determination on her face as she was fouled hard. She hit one of two three foul shots. She finished with 7 points, 3 rebounds, and 5 assists.

After the game,K-Rose performed his hits including “Just the Way You Are” to fans who remained in the darkened arena, watching the lone Latin star belt out unique covers of 50’s hits in Bachata form and showed his accessibility by patiently taking photos with fans after his performance.

All in All, a great night for Latinos and the WNBA’s New York Liberty.

Five Ways To Relax Before Your Vacation
Toddler Raves at ‘Marvel Universe LIVE!’ “It Was Awesome!!!”
Translate »
%d bloggers like this: