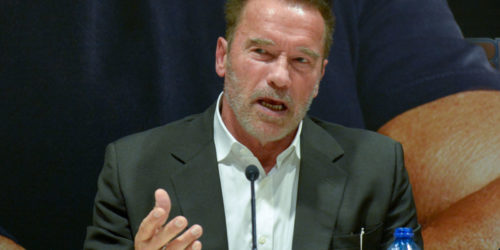 Former California Gov. Arnold Schwarzenegger  donated $100,000 to help a Los Angeles-based group’s effort to fight hate, saying he was “horrified” by anti-Semitic and racist protests in Charlottesville, Va., over the weekend.

“While these so-called ‘white nationalists’ are very lucky to live in a country that defends their right to voice their awful, incorrect, hateful opinions, the rest of us must use our voices and resources to condemn hate and teach tolerance at every opportunity,” he wrote on Facebook Sunday. “My message to them is simple: you will not win. Our voices are louder and stronger.”

Schwarzenegger announced the 100k donation to the Simon Wiesenthal Center as President Trump was under fire for failing to quickly speak out against the racist and anti-Semitic protests that resulted in three deaths, one civilian woman run over  by a hate filled white supremacist and two police officers (killed in a helicopter crash)

After two days of bipartisan criticism, Trump on Monday finally delivered a new statement that  condemning white supremacists, Nazis and KKK members for the violence in Virginia over the weekend, it leaves many thinking, why didn’t he say this in his initial speech?

Schwarzenegger and Trump have a long standing feud, but the former governor did not mention the president in his statement.  He also urged others to donate to anti-hate groups.

Rabbi Marvin Hier, founder of the Wiesenthal Center, said Schwarzenegger had been a supporter of the organization for more than 30 years.

“We’ve never been prouder of his leadership than when we saw his tweet last night challenging everyone to do more in the fight against hate,” Hier said.