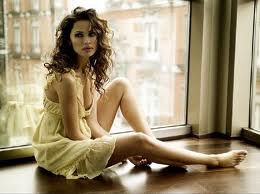 Almudena Fernández (born 1 January 1977) is a Spanish model. She was born at Benavente, in the province of Zamora.

Fernández began her professional career at an early age, leaving Madrid in search for a path that would take her to Milan, Paris, and finally New York, where she has established her home for the past few years.

Cosmopolitan TV awarded Fernández with the award for the best international model of 2007.