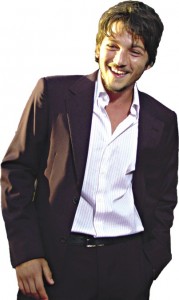 Diego Luna (born December 29, 1979) is a Mexican actor known for his childhood telenovela work, a starring role in the film Y tu mamá también, and supporting roles in American films. He is also known for his role in MilkDirty Dancing: Havana Nights.

Luna was born Diego Luna Alexander in Mexico City; the son of Fiona Alexander, an English costume designer, and Alejandro Luna, a Mexican set designer who is one of the most acclaimed living theatre, cinema and opera set designers in Mexico. His mother died in a car accident when he was two years old. She had worked in the film industry and had made sure that this was a life Luna would be immersed in. His father also reinforced the importance of theater and the arts in his life. In Luna’s youth, he would bring him to the sets and mentor him in all different aspects of his art, furthering his desire to become an actor and uphold a family tradition.

From an early age Luna began acting in television, film, and theatre. His first television role was in the 1991 movie El Último Fin de Año. His next role was in the telenovela El Abuelo y Yo (1992) alongside his childhood best friend, Gael García Bernal. In 1995 he played the role of Laura León’s son in the Mexican Soap opera El premio mayor. Following this, Luna began to receive more acting work. His big break came in 2001 when he was cast in the critically acclaimed Y tu mamá también , once again alongside García Bernal, as Tenoch Iturbide.

He is currently making a name for himself in the United States market, having starred alongside Bon Jovi in Vampires: Los Muertos (2002) and the Academy Award-winning Frida (2002). He was also in the western Open Range, the sequel to Dirty Dancing, entitled Dirty Dancing: Havana Nights, as well as The Terminal with Tom Hanks, and Criminal with John C. Reilly. In 2008, he appeared in the Harvey Milk bio-pic Milk playing Harvey’s flamboyant but emotionally unstable lover Jack Lira. He starred in a couple of movies with his best friend Gael Garcia Bernal.

He and Gael García Bernal own Canana Productions. The company recently joined with Golden Phoenix Productions owned by Producer Tom Golden of Hot Springs, Arkansas, to jointly produce a number of television documentaries about the unsolved murders of more than 300 women in the border city of Ciudad Juarez, across from El Paso, Texas.