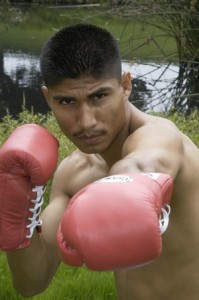 Garcia, 25, outclassed 32-year-old veteran Orlando Salido (39-12-2, 27 KO) at The Theater at Madison Square Garden on Saturday night, dropping him four times before a clash of heads—which resulted in Garcia’s nose being broken—in round eight forced a premature stoppage.

Garcia, of Ventura, Calif., won by technical decision to become the WBO featherweight champion. Despite the anticlimactic ending, his victory made him a first-time titleholder and sets up a possible unification bout with Chris John (WBA), Daniel Ponce de León (WBC) or Billy Dib (IBF) later this year.

Outside the ring, Garcia, referred to as “Mikey” by his family and friends, has positioned himself for a career in law enforcement, having graduated from the Ventura County Police Academy in 2010. That said, it’s difficult to imagine him leaving the family business (his dad and two older brothers also fought) any time soon, given the very bright and lucrative future he could have in boxing.

With a one-sided win over Salido in the books, Garcia has the look of an exciting fighter to watch in 2013.