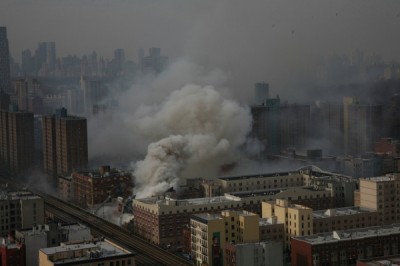 Tragedy struck New York City several days ago when an explosion in Manhattan’s East Harlem saw to the leveling of two buildings and resulted in numerous injuries and deaths of several New Yorkers.

Last Wednesday, the explosion was being linked to the leaking of natural gas from the infrastructure of the buildings; particularly the ancient gas pipes that vein them. According to Con Edison, the buildings are fed natural gas that runs through cast-iron pipes that are dated back to 1887 and may have led to the enormous explosion.

Con Edison also reports the buildings main network of pipes was repaired in 2004 and had been inspected on February 28th of this year. During the inspection it was reported that there were no leaks.

“Normally the soil in New York City, 18 to 24 inches down into the ground, would have zero concentration of natural gas,” said Robert Sumwalt of the National Transportation Safety Board. While the average soil wouldn’t have natural gas, the soil near the explosion site was up to 20 percent saturated.

While Con Edision and the National Transportation Safety Board have released statements, full investigations have yet to begin—mainly pressure-testing the gas lines to find where the leak occurred—because the area is still trying to clear the debris.

“It takes time to do investigations, document and voucher evidence and continue with forensics,” said Jim Long, spokesman for FDNY. “We’re going to be looking at every piece of evidence both to get an understanding of what occurred and why.”

No comment has been released by any offices that should have corrected this problem. But blame and investigation aside, the heavily Latino populated area has now left over a hundred people homeless; this includes some who were injured and will have no home to return to once they are released from the hospital.

This story is still developing.