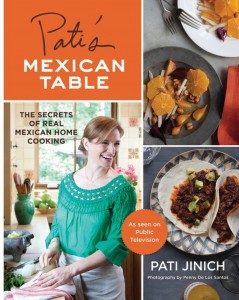 Transitioning from the academic world to the culinary world, host of ‘Pati’s Mexican Table’, Pati Jinich, gave a food tasting and demonstration on the patio of La Casa Azul Bookstore on Saturday May 4th. The event gathered many eager attendees of all ages and most of them were familiar with her television show already.

Beginning with introductions, Pati told the audience about her life growing up in Mexico and coming to the United States. She began doing demonstrations and teaching classes locally to those who were interested in Mexican cooking. Through stories about getting into cooking, to childhood memories, Pati had mentioned that, “the more I did it, the more humble I became.”

After the introductions, she went into demonstrating one of her recipes, Summertime Watermelon and Tomatillo Salad, a salad with watermelon, tomatillo, feta cheese, mint, jalapeno, lime juice, white distilled vinegar, salt, olive oil and vegetable oil. Throughout the demonstration, she explained the purpose of each ingredient, as well as why and how it worked with the other ingredients. She had also wanted the attendees to try Piggy Cookies, a cookie that is made with dark brown sugar, cinnamon, butter, honey, flour, baking powder, baking soda, sea salt, eggs and confectioners sugar. These recipes and more can be found in Pati’s cookbook: ‘Pati’s Mexican Table: The Secrets of Real Mexican Home Cooking’.

Afterwards, there were not only questions and answers, each person was able to take home a Goya Foods bag with a book of recipes and ingredients to get started to take home with them.